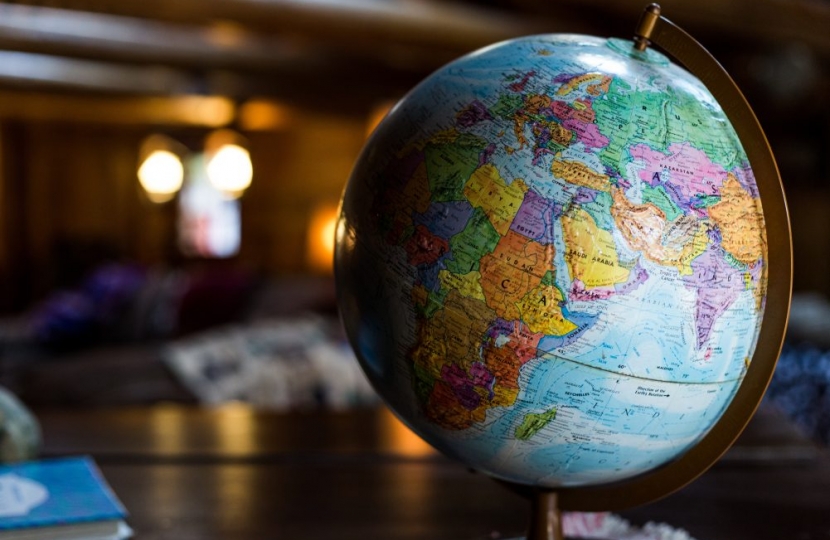 Merging of the Foreign Office and Department for International Development

“As you know, the Prime Minister has announced that the FCO and DFID will merge to create a new overseas department. The new Foreign, Commonwealth and Development Office (FCDO) will place UK Aid at the heart of what it does, leveraging the development expertise of DFID through the reach of the FCO’s global network.  The merger is set to be completed by September and the new department will be led by the Foreign Secretary.

I am proud that the UK has been at the heart of the international effort to tackle Covid-19, which shows the good that this country can do through our international engagement. The current crisis shows just how important it is that development and diplomatic efforts are fused together more closely, in order to maximise our international impact and make the biggest difference to people’s lives.

“I share your concerns regarding the crisis in Yemen and the plight of the Yemeni people who are caught up in the conflict. That is why I am proud that the UK is leading the international community to do more to respond to the crisis in Yemen. Since the conflict began, the UK has committed £970 million of funding, which has helped meet the immediate food needs of millions of Yemenis, treated thousands of children for malnutrition and provided over one million people with improved water supply and basic sanitation.

The UK’s long-standing position on Yemen is that there is no military solution to this conflict, and only a political settlement can bring long-term stability to Yemen and tackle the worsening humanitarian crisis. The UK is not a party to the military conflict as part of the Saudi-led coalition. Until the Government retakes export license decisions in line with the Court of Appeal’s judgment, or a successful appeal against the judgment concludes, the Government is under an obligation not to grant any new licences to export items to Saudi Arabia for possible use in the conflict in Yemen.

The UK has been at the forefront of international efforts to bring a peaceful solution to the appalling conflict in Yemen, fully supporting the efforts of the UN Secretary-General and the UN Special Envoy’s peace plan. I welcome the unilateral ceasefire announced by Saudi Arabia on 8 April, which has been extended, and it is more important than ever that all parties seize this opportunity for progress in Yemen. I will of course follow developments closely, and hope for a positive resolution.”

“I share your concerns about the debt vulnerabilities in developing countries, which has been amplified by coronavirus, and welcome that the UK has made available up to £150 million to the International Monetary Fund's Catastrophe Containment and Relief Trust to help developing countries meet their debt repayments.

Responding to this crisis requires international cooperation. The UK, alongside G20 and the Paris Club of official creditors has committed to a historic suspension of debt repayment from the world's poorest countries. This will see official creditors provide up to $12 billion of cash-flow relief, which, importantly, will enable countries to focus available resources on tackling coronavirus and ensure they can direct greater resources to vital healthcare efforts, rather than interest payments.

The Chancellor and G20 Finance Ministers have publicly called for the private sector to voluntarily participate in this initiative as well and, if it did so to the full extent, that would provide another $10 billion of breathing space for these countries. The agreement also provides time to assess what further assistance these countries may need as the full economic impact becomes clearer, for example if future restructuring of debt may be needed. I am glad that the Government is keeping all options under review.

I am proud that the UK is at the forefront of the global response to Covid-19. There has never been a more important time for us to deliver our 0.7% of GDP spent on international aid commitment, and helping the most vulnerable in the world’s poorest countries.”

I am told that the UK Government, along with international partners, is monitoring the arrest of Mubarak Bala closely. The Minister for Africa raised Mr Bala's case with the Nigerian Minister of Foreign Affairs on 21 May and the UK’s High Commission in Abuja has also discussed the case with the Nigerian Ministry of Foreign Affairs and Police. The UK will continue to stress the importance of a transparent investigation that respects Mr Bala's human rights, the rule of law, and the Nigerian constitutional right to freedom of religion or belief.

I am encouraged that, in Nigeria, the UK is calling on the Nigerian Government to do more to reduce conflict and improve social cohesion, including hosting a conference on fostering cohesion back in February 2020. I understand that a process of identifying solutions to meet the needs of all communities has begun. However, there is a long way to go yet.

Demolitions and Evictions in the Occupied Palestinian Territories

Demolitions and evictions of Palestinians from their homes cause unnecessary suffering to ordinary Palestinians, call into question Israel's commitment to a viable two-state solution, and, in all but the most exceptional of cases, are contrary to International Humanitarian Law.

I am glad the UK Government has allocated funding towards supporting around 124 Palestinian communities in Area C and East Jerusalem through needs-based and emergency services. This helps provide pre-fabricated residential, livelihood and agricultural structures. Funding has also been used to provide off grid energy to 50 households in Area C through the installation of 30 renewable energy systems.

I welcome that officials from the UK Embassy in Tel Aviv have repeatedly raised concerns with the Israeli authorities about the increase in evictions and demolitions of Palestinian properties in Area C of the West Bank and in East Jerusalem. It has called on them to cease the policy of demolitions and provide a clear, transparent route to construction for Palestinians in Area C. I understand concerns about the Sumarin family, and the Jewish National Fund, and I know that my colleagues at the Foreign Office are aware of this case.

The UNWRA has a unique mandate to support Palestinian refugees until a lasting political settlement is reached, and until then, the UK is clear it will continue to meet humanitarian need and promote regional security by supporting the 5.6 million Palestinian refugees across the Middle East.

The UK's contribution to the UNRWA last year helped provide education to more than 533,000 children, half of whom were girls and health services for around 3.1 million Palestinian refugees. While I appreciate concerns around the UNRWA, I believe that we cannot afford to lose the progress made, or risk young people, especially girls, losing the opportunity to have an education at all.

I am, however, very concerned about the allegations of incitement in the Palestinian Authority’s (PA) school textbooks. Both the PA and the Government of Israel need to prepare their populations for peaceful coexistence, including by promoting a more positive portrayal of each other. I welcome that the UK lobbied, and funded work to develop the methodology, for an in-depth review of school textbooks, and this review is now underway. More broadly, UK officials are in regular contact with the UNRWA to ensure high quality aid delivery. They currently judge that UNRWA is effective in allocating resources on the basis of need, however I appreciate your concerns about the performance of the UNRWA and have raised these with Ministers.”

I firmly support the UK’s longstanding position on the Middle East Peace Process.

There should be a negotiated settlement leading to a safe and secure Israel living alongside a viable and sovereign Palestinian state, based on 1967 borders with agreed land swaps, Jerusalem as the shared capital of both states, and a fair and realistic settlement for refugees. The UK Government consistently calls for an immediate end to all actions that undermine the viability of the two-state solution.

The UK’s position has not changed, including towards the West Bank and the 1967 borders. I am glad that the UK repeatedly reaffirms this commitment, including most recently at the UN Security Council, and will continue to do so. I am concerned by reports of possible Israeli moves towards annexation and believe that any such unilateral moves would be damaging to the renewed efforts to restart peace negotiations, and contrary to international law. No changes to the status quo can be made without an agreement negotiated by the parties themselves and I join my colleagues in Government in calling for a meaningful return to negotiations by all concerned parties.

As the United Kingdom looks to open up markets and trade post-Brexit, I certainly am a supporter of much closer trade links between the CANZUK nations.

Additionally, as we have such close cultural and family ties, I would also like to see the Government look at making travel to and from CANZUK nations easier.

Ending early and forced marriage of children must remain a high priority: it is shocking that more than 700 million girls and women alive today were married as children. While the practice of child marriage has slowly been declining, particularly for girls under 15, continued global action is essential if it is to be eliminated. The UK is leading international efforts in this area. Indeed, UK pressure helped ensure a separate target on ending child marriage was included within the Global Goals.

The UK’s £39 million programme to end child, early and forced marriage is helping thousands of girls take back control and choice over their bodies and their futures. Support for the UN’s ‘Accelerate Action to End Child Marriage’ programme plays an important role. It is working to strengthen legal and policy frameworks, scale up access to services for girls at risk of child marriage, and tackle harmful social norms underlying child marriage. The £39 million programme also supports AmplifyChange, a multi-donor fund working for universal sexual and reproductive health and rights, including for grassroots organisations with the local knowledge and expertise working to address child, early and forced marriage.

Women should be able to live free from violence in all its forms in all settings. The UK is providing the UN Trust Fund to End Violence Against Women with up to £12 million funding over the three years to 2020. The Fund supports organisations across the world to tackle gender-based violence, improve access to services such as legal assistance and healthcare, and strengthen laws and policies that protect women and girls. In 2017, the Fund managed projects in 80 countries and territories. This is expected to benefit 750,000 women.

The UK has always championed freedom of religion or belief for everyone.  As a country that has always been a beacon for freedom and tolerance, the UK must not shirk its responsibilities.  The Independent Review of Foreign and Commonwealth Office Support for Persecuted Christians, conducted by the Anglican Bishop of Truro, the Right Reverend Philip Mountstephen, has been published. The UK Government is committed to implementing the recommendations from the Bishop of Truro’s Review.

Unfortunately I was not able to attend the Open Doors 2020 World Watch List launch as it conflicted with a number of other diary commitments in what has been a very busy week. However, I assure you that I will follow this issue closely and ensure the Government deal with it seriously.