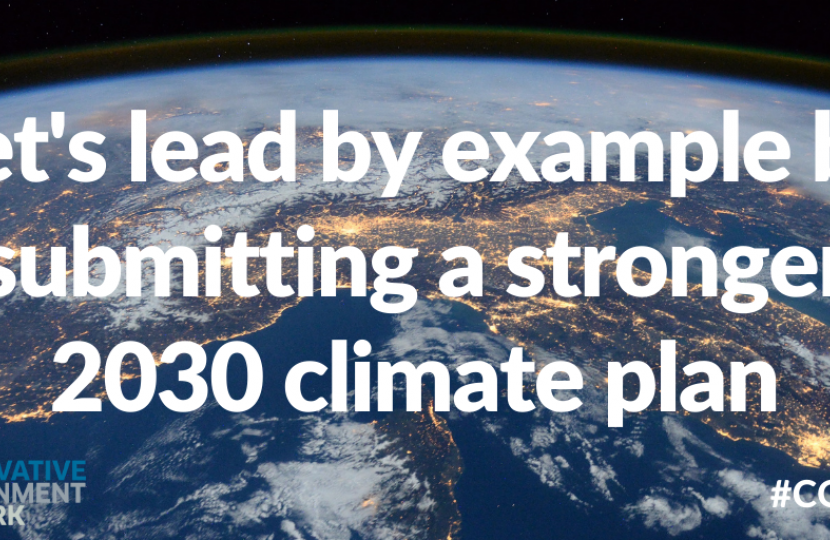 North Devon MP, Selaine Saxby, has urged Secretary of State for Business, Energy and Industrial Strategy and COP President, Alok Sharma MP, to continue to prioritise action on climate change ahead of the upcoming UN Climate Summit (COP26), which the UK will host in Glasgow in November 2021. The summit provides the UK with an important platform to raise international ambition on climate change, and promote British businesses and expertise in the growing green economy.

2021 will put Global Britain at the centre of the world stage as we host this major international climate change summit in Glasgow. It is vital that the Government not only works to encourage greater international action on climate change, but demonstrates true leadership by being as ambitious as possible at home. Faster reductions in emissions will spur more investment in the clean technologies of the future and create hundreds of thousands of green-collar jobs across the country.

I know that climate change is a serious concern for many of my constituents in North Devon, which is why I have urged the Government to ensure that local residents can be part of a national conversation on climate change next year.

The North Devon MP wrote to the COP President, Alok Sharma MP, alongside forty-one MPs and Peers, who are members of the Conservative Environment Network Parliamentary Caucus. The letter urged the government to set a stronger national climate target for 2030, which all countries have to do this year under the Paris Agreement. This will be the first summit where the UK will represent itself outside of the EU, and the first since the UK was the first major economy to adopt a legally binding target to reduce our emissions to net zero by 2050.

The letter also urged the Government to engage the public on climate action through a series of national events and a communications campaign, to ensure that everyone is involved in this international event and can learn more about climate change and our journey to net zero.

The Government has announced the creation of a new Digital Markets Unit to prevent tech giants like Google and Facebook from unfairly disadvantaging news publishers who provide content.