The Prime Minister meets Max ‘Boy in the Tent’ Woosey 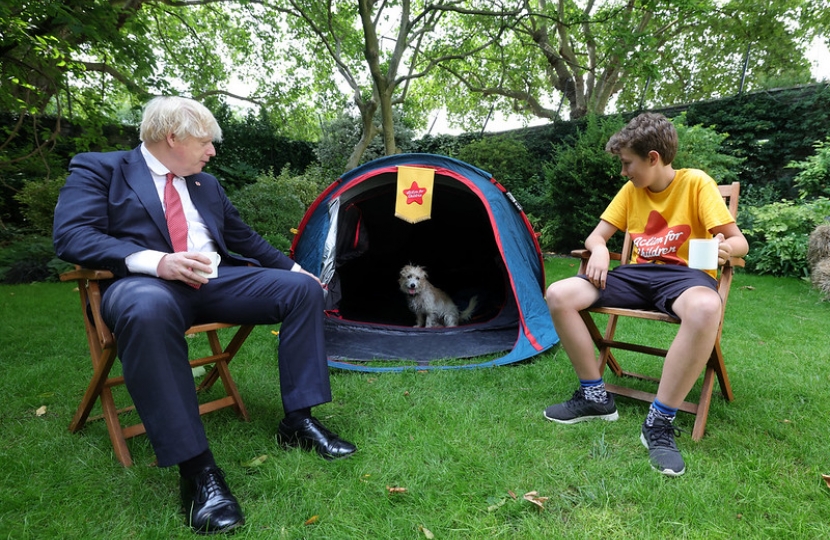 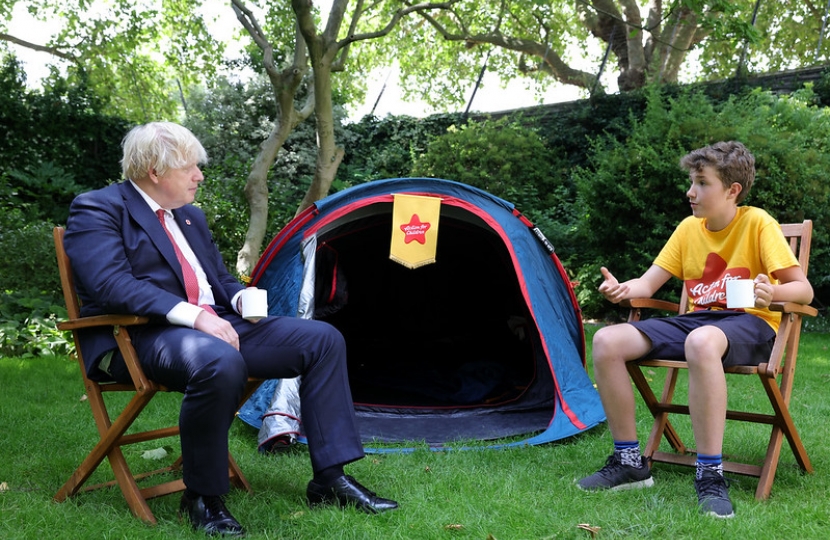 The Prime Minister meets Max ‘Boy in the Tent’ Woosey as the 11 year old prepares to ‘Boycott his Bed’ for Action for Children.

Max who has been camping in his garden since the beginning of lockdown last year, pitched his tent in the Downing Street garden this afternoon ahead of the charity’s national sleepout tonight

Marathon camper Max ‘Boy in the Tent’ Woosey has pitched his tent and met the Prime Minister in the garden at Number 10 today to help rally support for vulnerable children across the UK.

Max’s camping adventures started when he began sleeping in his garden in North Devon after his neighbour Rick, who later died of cancer, gave him a tent to “have an adventure in”.  He has slept out for over 400 nights and earlier this week became a ‘zookeeper by night’ sleeping out as ZSL London Zoo for Action for Children.

His exciting camping journey has led him to the door of Number 10, where he met the Prime Minister this afternoon, and pitched his tent in the garden. The Prime Minister has previously sent Max letters of support for his camping and fundraising efforts.

Max is asking the public to support Action for Children’s national sleepout tonight across the UK, where families are taking part in ‘Boycott your Bed’ by sleeping out in the most unusual place they can think of - whether it’s camping out under the stars or bunking down in the bathroom.

“Today I met Max who has done an absolutely stellar job of raising money for some very worthy causes by sleeping outside for over a year now.

“Max has inspired young people all over the country and I support his efforts today to raise money for the children who need it most.”

Max Woosey said: “It’s so exciting to visit Number 10 and meet the Prime Minister.  Although I can’t see myself ever sleeping in an actual bed again, I didn’t expect my adventure to bring me to one of the most famous addresses in the world! I hope my camping efforts will inspire children and families across the country to support Boycott your Bed.”

Melanie Armstrong, Action for Children’s chief executive said: “It’s been a very tough year, but Max and his trusty tent have been a shining light to children all over the UK.  We want every child to have a safe and happy childhood and are delighted that the Prime Minister is able to meet Max today.  We would love families to follow Max’s example and support Boycott your Bed to help children who have been hit hardest by the pandemic.”

Max’s local MP, Selaine Saxby said: “Max has inspired so many children locally in North Devon to do something to help others and it is fantastic to see him now doing the same on a national stage.  Good luck to everyone “Boycotting their Bed” tonight to help raise funds and awareness for Action for Children who do so much to protect and support our most vulnerable children and young people.”

Tonight, Action for Children will host a virtual event, which connects everyone who registers with thousands of others who will be bedding down in unusual places across the UK.

Sign up for Boycott your Bed and the money you raise can make children’s dreams of a safe and happy childhood come true. Visit www.boycottyourbed.co.uk/max for more information.