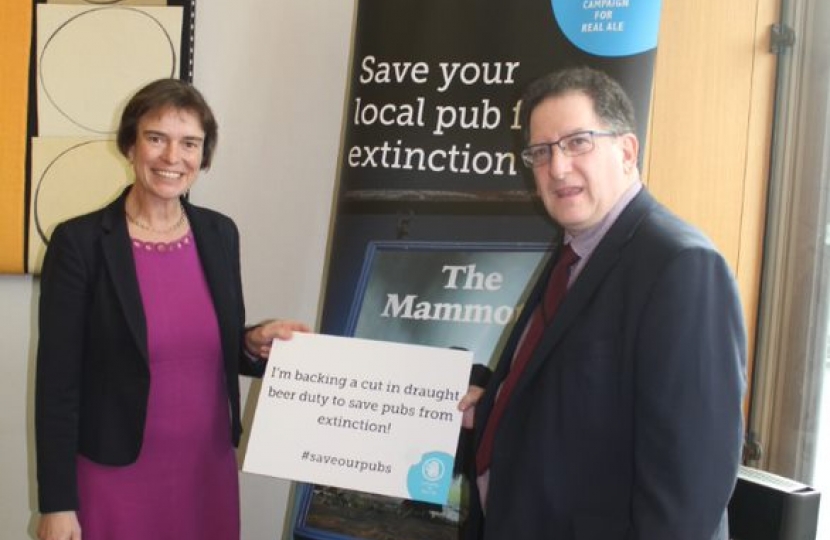 A letter signed by 68 Conservative MPs including Selaine Saxby, MP for North Devon, has been sent to HM Treasury today, imploring the Chancellor, Rishi Sunak, to cut beer duty in his upcoming Budget statement on March 3rd.

The initiative was driven by Richard Holden, MP for North West Durham, a prominent member of the All-Party Parliamentary Beer Group and a celebrated Long Live The Local Beer Champion.

It follows concerted calls from the beer and pub sector for increased support from the Chancellor in his Budget following the announcement of the Prime Minister’s roadmap to reopening, which confirmed that pubs will not be able to fully open inside and outside without trading restrictions until mid-June at the earliest.

The British Beer & Pub Association has said the very cautious reopening of pubs will cost the sector £1.5 billion in lost trade in April alone, as 3 in 5 pubs will not be able to open or be viable with outside service only. It says that even when pubs can reopen indoors from mid-May at the earliest, they will still be significantly down on business due to remaining trading restrictions.

The UK pays £3.6 billion in Beer Duty each year - more than Germany, Spain, Italy, Netherlands & Ireland combined. British beer drinkers pay 11 times more duty on beer than those in Germany as well as Spain * Seven in ten alcoholic drinks sold in a pub are beers, underlining how important beer sales are to pub turnover. At present, £1 in every £3 spend in a pub goes to HM Treasury in a range of taxes including Beer Duty.

“Our pubs are at the heart of our communities and lockdown has hit them harder than almost any other sector. Government support has been welcome and I applaud those pubs, bars and restaurants that have innovated and revolutionised their takeaway offering to keep going. Whilst I am hopeful that we will see a continuation of Business Rates support and reduced VAT next week, the best way for them to build back better after this crisis is to get people back into pubs and what better encouragement than to see real action on beer duty.”

“We have gathered more than 500,000 signatures and 275,000 people have written to their MP since the campaign started. Each signature and email represent someone who cares deeply about pubs and breweries and wants the Government to ensure they can continue to play a vital role in their local community and economy. I`m pleased to see so many MPs have recognised how much their constituents want to see a cut in Beer Duty.”

“Pubs are the heart of our communities and a vital part of the UK economy, with a presence in just about every city, town and village across the country. Amid this crisis though they face an existential threat, and thousands could be lost for good.

“It is up to the Chancellor, Rishi Sunak, to deliver the support our pubs and brewers need. That includes a beer duty cut that allows them to survive and thrive in the future. I hope he listens to our sector and those on his backbenches pleading him to do the right thing.”

Last month Selaine Saxby MP for North Devon was one of three MPs to ask the Leader of the House, Jacob Rees-Mogg MP about Pet Theft. In Devon and Cornwall on average 80 dogs a year are stolen from their owners, a quarter of which are linked to organised crime.