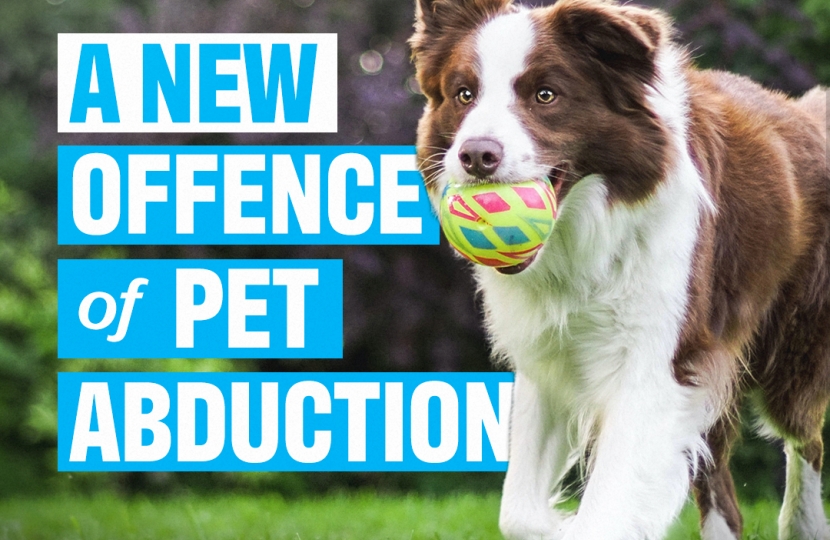 Selaine Saxby MP has welcomed the Government response to the issue of pet theft, a crime that that has been on the increase over the last eighteen months.

In 2021 the Government will develop a new ‘Pet Abduction’ offence and explore appropriate primary legislative vehicles to take forward this new offence. The details of this new offence will be subject to further consideration.

This year, DEFRA will also take forward the recommendations on microchipping from this report under the review of the ‘The Microchipping of Dogs (England) Regulations 2015’.  DEFRA will explore; new requirements to register more details on dog microchip databases; a single point of access and enabling changes of keeper to be tracked more closely.

The Home Office will work with the police to explore options for ensuring pet thefts are recorded in a consistent manner and readily identifiable within police force information management systems across England and Wales. Cross government leads will also explore the feasibility of options to improve data collected on pet theft cases throughout the Criminal Justice System, informed by the work the Home Office takes forward.

“I like many people bought a new puppy during the pandemic and the cost of puppies has significantly increased, and likewise, so has the attention of organised criminal gangs in rural areas who have been attempting to steal them.

I have been contacted by many concerned constituents over the past year, particularly women in rural areas, who have seen the reports and have been scared to walk their dogs alone.

Since then, I have been actively campaigning on this issue, having raised this during Business Questions with Jacob Rees-Mogg MP back in March, and spoken about it in the Police and Crime Sentencing Bill in July.  I had received reassurances from the Lord Chancellor ahead of recess that actions would be taken once the Pet Theft Taskforce reported, and I am delighted to see these changes announced today.

The current laws do not reflect the emotional harm that pet theft can have on owners, so I am very glad that the Government are taking this seriously and will look not only at measures to make it harder to profit from pet theft, but that eventually and hopefully the punishment will reflect the crime.”

Commenting on the report, Secretary of State for Environment, Food and Rural Affairs, The Rt Hon George Eustice MP said:

“We are a nation of pet lovers. Pets are much loved members of the family in households up and down the country, and reports of a rise in pet theft have been worrying. Pet owners shouldn’t have to live in fear, and I am pleased that the Pet Theft Taskforce that we launched earlier this year has developed a series of recommendations to ensure that we can stop criminals in their tracks and give peace of mind to pet owners.”

The £20 uplift to Universal Credit was a temporary measure brought in during the pandemic, and has provided an unprecedented lifeline during the extended period of the pandemic.  This support adds up to between £6-9billion per year, and were it to remain, this would need to be paid for by an addi