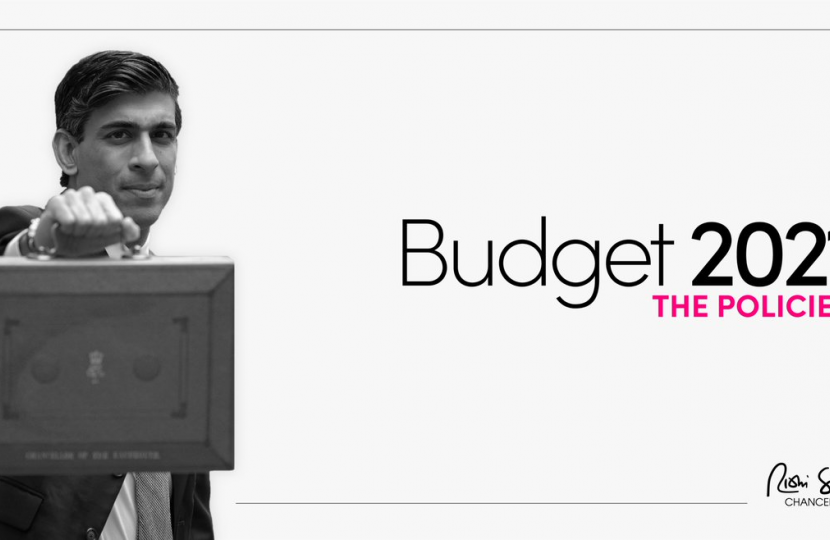 "Today's budget is good news for North Devon, so reliant on our tourism and hospitality sector, and with a myriad of small businesses.

“With £407 billion of support for families, jobs and businesses, it is right that the Chancellor is honest with the British people about our public finances.

“At the same time, I was elected on a commitment to level up communities like ours, and I am thrilled that this Conservative Government is now making good on that promise – by building our future economy and investing in every corner of the United Kingdom”.

Today, the Government set out an ambitious plan that focuses on supporting people and businesses through this moment of crisis – well beyond the end of the roadmap – to ensure they have the security and stability they need.

At the heart of the Budget are measures to build our future economy, levelling up across all regions of the United Kingdom and spreading opportunity everywhere.

As part of the Government’s commitments to fund the nation’s priorities, the Budget confirmed:

An extension of the Coronavirus Job Retention Scheme until the end of September, ensuring it continues to support employers as they begin to reopen. Two further grants will also be available to self-employed people – and the newly self-employed will also be eligible for both grants.

A continuation of the temporary Universal Credit uplift for a further six months. The Budget also confirms new support for providing young people with new skills: including doubling the incentive payment to SMEs to take on apprentices of any age to £3,000, and £126 million to triple the number of traineeships next year.

New Recovery Loans and a new Restart grant of up to £18,000 to help businesses as they reopen. Support for the sports, arts and culture sectors will also be increased by a further £700 million as they begin to reopen.

Extending the business rates holiday, VAT cut and stamp duty holiday. There will also be a new mortgage guarantee scheme from April which backs 95 per cent mortgages – helping those with smaller deposits.

Opening up the new Levelling Up Fund for its first round of bids, worth £4.8 billion across the United Kingdom. The Budget also announces 45 new Town Deals to help spread opportunity across the country.

Announcing the locations of eight freeports in England, which will encourage free trade and bring investment to all regions of the country through lower taxes and cheaper customs.

Launching the first ever UK Infrastructure Bank – located in Leeds – to invest in public and private projects to drive green growth and create green jobs.

A new Help to Grow scheme to boost productivity of small businesses, to ensure they are embracing the latest technology and management training.

Being honest with the British people about the need to fix the public finances. We are standing by our manifesto pledge not to increase Income Tax, NICs or VAT and we are freezing alcohol duty, and fuel duty for the 11th year in a row. However to fix the public finances, corporation tax on large company profits will increase to 25 per cent in 2023. This will be tapered and 70 per cent of businesses will be completely unaffected.

The Budget will strengthen all four parts of the United Kingdom, with bespoke schemes for each nation confirmed additional funding for Scotland (£1.2 billion), Wales (£740 million), and Northern Ireland (£410 million).

“Throughout this pandemic, my top priority has been to protect jobs, businesses and livelihoods. Today’s Budget reaffirms this commitment, with £407 billion to support the British people this year and next as one of the largest, most comprehensive and sustained responses this country has ever seen.

“It is thanks to successive Conservative governments that we have been able to respond to this crisis as boldly as we have. But we need to be honest about the challenges facing our public finances, and how we will begin to fix them.

“As we look ahead, this Budget lays the foundations of our future economy – driving up productivity, creating green jobs, supporting small businesses, and levelling up across the entire United Kingdom”.

Last month Selaine Saxby MP for North Devon was one of three MPs to ask the Leader of the House, Jacob Rees-Mogg MP about Pet Theft. In Devon and Cornwall on average 80 dogs a year are stolen from their owners, a quarter of which are linked to organised crime.