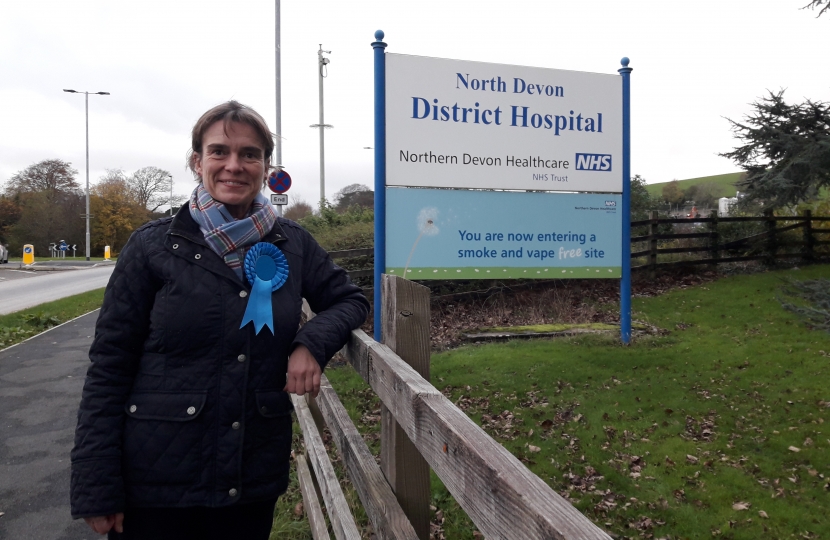 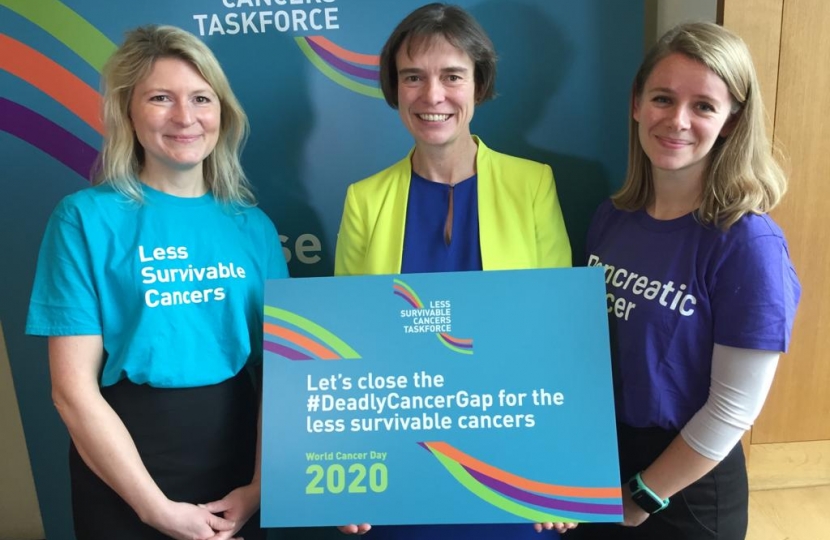 It is incredibly important to protect and support the health of children and young people in our society; approximately 10 per cent of 5 to 16 year olds have a clinically diagnosable mental health problem.

In addition, the NHS is on track to deliver new waiting time standards for eating disorder services by 2020/21. Four fifths of children and young people with an eating disorder now receive treatment within one week in urgent cases and four weeks in non-urgent cases. Extra investment will enable maintained delivery of the 95 per cent standard beyond 2020/21.

I know in North Devon, the waiting lists for mental health support are often too long, and I have been working with the Department of Health and our local NHS to try and improve the situation. I will put the event on 30th March in my diary and make every effort to attend.

The Government will now carefully consider the proposals before taking any next steps, and in the meantime will continue to hold the NHS to account on its existing standards.

In the meantime, the Government is investing to reduce existing waiting times which I know are too long in many different areas of the NHS. This investment includes an extra 50,000 nurses and 6,000 GPs, which should go a long way to improving the situation. As far as North Devon is concerned, we have always had recruitment issues due to our relative isolation, and I am working with our NHS Trust to find solutions.

This country has a proud history of allowing free speech but the right to peaceful protest does not extend to harassment or threatening behaviour. The law already provides protection against harassment and intimidation, and the police have a range of powers to manage protests. Like all members of the public, protesters are subject to the law and suspected criminal offences must be robustly investigated and dealt with by the police.

That said, while I do not want to see peaceful protest curbed, it is completely unacceptable that anyone should feel harassed or intimidated simply for exercising their legal right to healthcare advice and treatment. The decision to have an abortion is already an incredibly personal one, without women being further pressured by aggressive protesters.

Under this Government, the NHS will always remain free at the point of use and in public ownership. I would not support anything which meant the privatisation of the NHS or additional costs on healthcare for those who need it.

Free trade is a driver of economic growth which can raise incomes, create jobs, and lift people out of poverty, which is why I am glad that outside of the EU the UK will be able to strike new trade agreements with countries across the globe. That said, more trade should not come at the expense of the high levels of quality and protection enjoyed in our country.

The UK will continue to ensure that the NHS is protected in all trade agreements it is party to. Outside of the EU, rigorous protections for our NHS will be maintained and included in any future trade agreement which the UK negotiates.

I am pleased that the Government recognises the sensitivity of this issue and the range of views expressed by people on all sides of the debate. It is a highly sensitive issue, regardless of where your view lies and one where it is important that the matter is considered with due care and sensitivity.

The Government is working towards the laying of regulations for a new legal framework for the provision of abortion services in Northern Ireland, as required by the 2019 Act. The new framework will be in force by 31 March 2020.

To help inform the shape of the legislation that is introduced, a consultation was held. This has now closed, and the Government is due to publish its response shortly. I very much welcome the Government’s commitment to ensure that the health and safety of women and girls, and clarity and certainty for the medical profession, are at the forefront of their considerations.

Thank you for contacting me about adult social care.

I believe we must all receive dignified care in old age. With an ageing population, this is one of the biggest challenges our country faces. I support the Government’s commitment to making sure that the most vulnerable in society gain the support they need. Whilst it is important to note that more than 4 of every 5 people in care receive care from good and outstanding organisations, it is clear that more needs to be done to tackle this serious challenge – crucially by securing a long term funding solution. I am delighted that the Prime Minister has spoken of his determination to tackle this, stating in his first speech as Prime Minister that “we will fix the crisis in social care once and for all with a clear plan we have prepared, to give every older person the dignity and security they deserve”.

The Government is currently producing a Social Care Green Paper, which will consider a range of proposals to improve social care, as well as funding options to ensure our social care system is able to meet the needs of our ageing society and is placed on a sustainable footing for the long term. Since 2015 local authorities have had greater flexibility over the use of the council tax social care precept, so they can choose to raise extra money, as well as retain savings from the New Homes Bonus, totalling £240 million.

In the Spending Round in September, an extra £1.5 billion was made available to councils for adult social care services. This funding should be viewed as a significant down payment as we move towards a long term funding solution.

Money alone will not fix the problem and reform is needed to encourage high standards across the whole country. It is vital for us to consider ways of better joining up health and care services, and I am encouraged by the use of the Better Care Fund to assist local government and the NHS with the implementation of integrated health and care services.

To ensure early diagnosis of eye disease, it is important that people are encouraged to get their eyes tested on a regular basis.  Clinical advice states that most people should get their eyes tested every two years.  Free NHS eye tests are available for those diagnosed with diabetes or glaucoma and those aged 60 or over.  This helps to encourage people at particular risk of developing eye disease to have their condition checked regularly.  The latest figures show around a 10% increase in the number of eye tests since 2010 so some progress is being made.

I also welcome the broad range of support available for those diagnosed with visual impairments. Many hospitals have Eye Clinic Liaison Officers, or similar early intervention support staff, who provide the practical support which patients need following their diagnosis, including advice on how to deal with their sight loss and maintain their independence.

I will liaise with the Health Secretary about this issue to make sure that North Devon is able to deliver the service that people with sight problems deserve and expect.

As a general principle, I believe that individuals should have as much control as possible over their own lives.  This leads me to be broadly supportive of a change in the law to allow assisted dying for those who are terminally ill and mentally competent.  We must be incredibly careful to ensure that any change in the law does not encourage anybody to make the decision to end their life.  New or amended legislation should only allow those who are already determined to end their lives to do so without their loved ones having to endure difficult legal processes afterwards.

This is an incredibly difficult issue and the case studies you highlight are deeply saddening.  However, I completely understand why other people feel equally strongly against assisted dying and their views are to be respected.  It is good that these sorts of issues are almost always considered to be 'issues of conscience' when Parliament votes on them and so MPs are free from political constraints in deciding their views.  Assisted dying is regularly considered by Parliament and I am sure that this new Parliament will be no exception.

I believe that overseas visitors should be able to access our NHS as long as they make a fair contribution, just as the British taxpayer does. The NHS is a national - not an international - health service and I commend the Government’s determination to stamp out misuse of the system to ensure it remains free at the point of need in this country.

After a review of the evidence, the annual surcharge will now cost £400 per annum, with a discounted rate of £300pa for students (and their dependants) and Youth Mobility Scheme applicants. The proposed amount is still below full average cost recovery level, which is calculated as £470. The UK must protect its reputation as a great place to live, work and study, and increasing the IHS still offers access to far more comprehensive services at a lower cost than some of our main competitor countries.

The IHS applies to those living in the UK temporarily. Those with indefinite leave to remain and vulnerable groups, including asylum seekers and refugees, are exempt from the charge. It is only right that people who come to the UK for more than six months should contribute to the running of the NHS.

People for whom the IHS applies work in a broad range of jobs fulfilling important jobs in the public and private sectors, jobs that keep the country running. I believe that the IHS should be applied equally, to all non-EEA residents who are in the country temporarily. All residents will benefit from the £220 million funding for the NHS that this fund will provide. The answer is not therefore to exempt nurses from the charge, but to increase their pay; and this is happening.

This charge was brought in to ensure that temporary users of the NHS from outside the EEA are making a fair contribution to the functioning of our national asset, regardless of their employment status. Although some temporary migrants will be paying tax and National Insurance contributions, they will not have made the same financial contribution to the NHS which most UK nationals and permanent residents have made, or will make, over the course of their working lives. It is therefore fair to require them to make an up-front and proportionate contribution to the NHS.