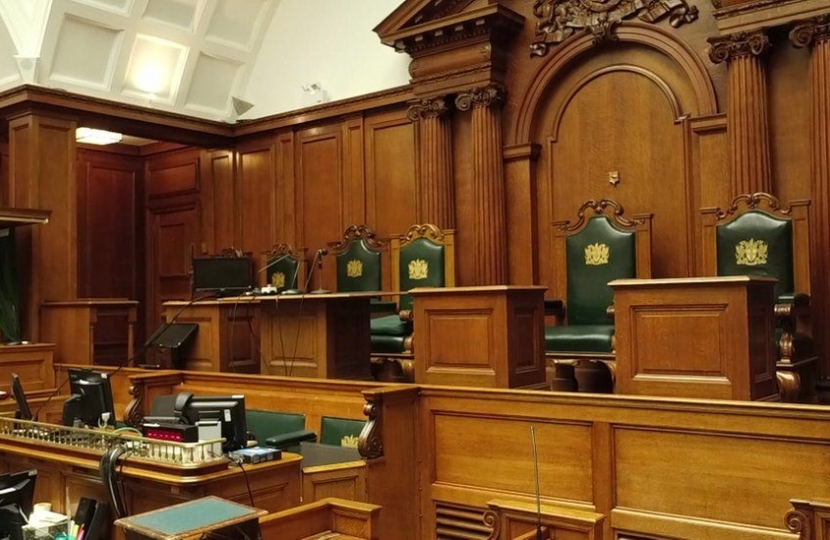 I consider the conduct of Armed Forces personnel serving overseas to be of the utmost importance. I am proud of the fact the UK has some of the most committed and professional service personnel anywhere in the world, who not only adhere to the rule of law but who promote it through the conduct of their operations.

I have full confidence that this Bill ensures allegations of torture will continue to be investigated and prosecuted wherever and whenever there is sufficient evidence to do so.

As you are aware, for relevant offences, the Bill stipulates that once five years have elapsed from the date of an incident, there must be new and compelling evidence for a prosecutor to seek prosecution of a service person or veteran for that offence, if committed during an overseas operation.

I appreciate that some individuals wish to see offences related to torture exempted from the Bill. However, I would like to reassure constituents that it provides no impunity for torture and makes provisions for the prosecution of any service personnel found to have been involved in such acts. Under the Bill, serious offences, including of grave breaches of the Geneva Conventions, will still be prosecuted on the basis of the sufficiency of new evidence and whether a prosecution would be in the public interest. Furthermore, service personnel are subject to the criminal law of England and Wales, and a disciplinary framework through Service Law, and have a duty to uphold both, wherever they are serving in the world.

I have had a number of constituents bring this issue to my attention. Freedom of speech, the rule of law, and equal rights define us as a society, and I am determined to promote those values actively. While I am not able to comment specifically and in detail on the case of Alex Belfield, as a general principle it is important that the law protects freedom of speech.

The setting up of illegal traveller sites can be a nuisance for local communities and an inappropriate development of open space. I know that many local residents across the country, and here in North Devon, are concerned about anti-social behaviour, fly-tipping, and noise related to unauthorised sites.

After two consultations on this issue, I welcome the fact that as part of the Police, Crime, Sentencing & Courts Bill, new laws will be introduced to increase the powers available to the police in England and Wales. The Bill will introduce a new criminal offence where a person resides or intends to reside on any public or private land without permission and has caused, or is likely to cause, significant harm, obstruction, or harassment or distress. In addition, the Bill amends the Criminal Justice and Public Order Act 1994 to broaden the list of harms that can be considered by the police when directing people away from land and increase the period in which persons directed away from land must not return from 3 months to 12 months. Amendments to the 1994 Act will, in addition, allow police to direct trespassers away from land that forms part of a highway.

I believe these new measures are a proportionate and necessary increase in powers for the police. The Government has made it clear that only a minority of travellers are causing problems, such as through abusive behaviour and extensive litter and waste at illegal sites. The vast majority of the travelling community are law-abiding people, and we must ensure that there are legal sites available for travellers.

I welcome the fact that as of January 2020, the number of lawful traveller sites increased by 41% from January 2010. The Government has also given £200,000 to support projects working with Gypsy, Traveller and Roma communities to tackle discrimination, improve integration, healthcare and education.

The Government has taken steps to ensure that those exercising their rights to enjoy the countryside are not inadvertently impacted by these measures, and I am confident that Government action will help to reduce the number of illegal caravan sites across the country, while respecting people’s right to a nomadic way of life.

I understand that a number of my constituents have concerns about the proposed new powers to deal better with protests.

As I have made very clear, freedom of assembly and freedom of expression are vital rights that I wholeheartedly support, and I can reassure you that the Government is clear that the right of an individual to express their opinion and protest is a cornerstone to our democratic society.

The issue in question relates to the balance between the rights of a protestor and the rights of individuals to go about their daily business. There have, unfortunately, been examples where protests have caused unjustifiable disruption and distress of other citizens, as seen in our city centres. For example, some of the scenes we saw from the Extinction Rebellion protests in London, where ambulances were stopped from reaching hospitals, were deeply troubling and concerning.

Therefore, the measures in the Bill are not about stopping or clamping down on our right to protest, but instead ensuring the police can better manage highly disruptive protests and maintain the balance I have outlined.

I fully understand my constituents’ strong feelings on this issue, and they are right to ensure I was am aware of these feelings. While we may not agree, I hope this response has outlined clearly why I am in favour of the changes in the Police, Crime, Sentencing and Courts Bill relating to the management of protests.

The sexual harassment of women and girls, including in public places, is totally unacceptable. No one should be forced to change the way they live to avoid harassment and abuse, and I am relieved that action is already being taken. Work on the wide-ranging Law Commission review into hate crime is well underway and the review will identify any gaps within the current legislation and determine if there should be additional protected characteristics such as misogyny and age. The Law Commission's consultation closed on 24 December 2020 and I am glad that those with an interest had the opportunity to share their views. The Government will of course consider the review's recommendations when they are complete.

The new Voyeurism (Offences) Act, which criminalises the reprehensible behaviour of upskirting, will also go to prevent this behaviour from being committed. There is no doubt that this activity is criminal and will not be tolerated, and for the most serious offences, this law will ensure that the offender is also placed on the sex offenders register.

There is more work to do, and it is therefore welcome news that the Home Secretary has appointed Nimco Ali as an Independent Adviser on Tackling Violence Against Women and Girls. Nimco Ali will advise the Home Secretary and other ministers on the government’s new Tackling Violence Against Women and Girls Strategy, and I am pleased that Ministers will be bringing forward the new strategy this year.

The Government reopened a call for evidence to further collect views from those with lived experience of, or views on, crimes considered as violence against women and girls. The consultation previously ran for 10 weeks from December to February, and it will now remain open until 26 March 2021. I would encourage my constituents to take part, if they feel able to do so.

I am proud that this country is built on the historic values of unity, inclusivity, tolerance and mutual respect. Hate crime, in all its forms, goes directly against these values and it is completely unacceptable that anyone in our society should live in fear of intimidation or violence. As such, we must stand up for diversity and face down discrimination wherever we see it.

Since the publication of the Hate Crime Action Plan in 2016, I have been encouraged by the progress that has been made, which has seen an increase in reporting and improvements in identification and recording of crime by the police. However, rates of attrition within the criminal justice system remain worryingly high and targeted online abuse continues to present a significant problem. While in contrast to overall trends, under-reporting still exists within specific groups.

There is a wide-ranging Law Commission review into hate crime in place. Work on this is well underway and the review will identify any gaps within the current legislation, determining if there should be additional protected characteristics such as misogyny and age.

I am committed to upholding free speech, and legislation is in place to protect this fundamental right. The Law Commission's consultation closed on 24 December 2020 and I am glad that those with an interest had the opportunity to share their views. The Government will of course consider the recommendations of the review when they are complete.

The Ministry of Justice continues to make provision of £1.7 billion a year in legal aid and that a new Legal Support Action Plan has been announced which will ensure resources are available for those who need it most. Measures in the action plan include a new focus on the individual and early intervention, as well as greater support for those who need solutions to problems before they become entangled in the legal system. The action plan will allow for an additional £3 million to support those representing themselves through the court system.

I fully understand your concerns regarding the Civil Legal Aid (Remuneration) (Amendment) (Coronavirus) Regulations 2020 and I welcome the opportunity to provide some clarity. After passing on these concerns to the Justice team, Ministers have confirmed that there will be a full consultation on these fee changes before anything is finalised next year. This is very welcome and will ensure views and opinions are heard.

It is also the case that the new, increased fee structure has been under consideration for a while and reflects the digitalisation of the tribunal system. It is important to remember that this has allowed justice to continue during the current pandemic.

It is vital to consider that these are temporary changes. Immigration and asylum practitioners have been contacted regularly and Ministers will continue to engage through the full consultation on what should replace them by June 2021.

You may be pleased to know that new fee structure will result in practitioners being paid substantially more for their work per hearing than they are currently. Fees have increased from £227 for no hearing and £567 for a hearing to £627 for both.

The end of a marriage is an extremely painful time for any couple. When a relationship ends, it cannot be right for the law to introduce or exacerbate conflict between divorcing couples. Currently, couples have an incentive to blame each other for the end of marriage based on ‘unreasonable behaviour’, adultery or desertion unless they can wait to divorce on the basis of separation for a minimum of two years, even if the separation is mutual. If one spouse objects to the divorce then the other spouse must wait five years before seeking a divorce.

As you may be aware, the Government has announced proposals which would mean that the irretrievable breakdown of a marriage will remain the sole ground for divorce. At the same time, the new proposals would remove the need to show evidence of the other spouse’s conduct, or a period of living apart. A new notification process would be introduced to allow one, or possibly both parties, to notify the court of the intention to divorce. Finally, the proposals would remove the opportunity for the other spouse to contest the divorce, which serves no practical purpose.

Removing the requirements to allege fault or show evidence of separation would promote a less acrimonious process, helping families look to the future.